The Centurion and the Queen

I've been privileged enough to be able to do some peer reviewing over on the new RP promo blog. Today was Way Back Wednesday and since I'd already read this story a few months ago, it seemed like a great opportunity to put in my two cents. Here's the review... 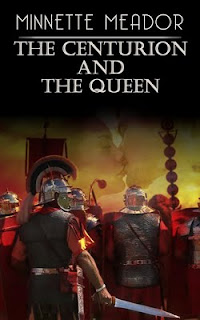 THE CENTURION AND THE QUEEN

The Centurion and the Queen, by Minnette Meador, is a journey back in time, with a love destined to stand the test.

Marius has been stationed on the island of 60AD Britannia for sixteen years. Once a celebrated Roman hero, Marius still clings to the old traditions as a fair but tough leader to his men. But when Delia, warrior and Queen of the declining Breton civilization, enters his life, she challenges everything he believes, effortlessly stripping away years of Roman conditioning, and angering Marius to the point of betraying his training—and his oaths. He simply cannot resist her.

Fighting to save as many of her people as she can, the last thing Delia expects is to crave the touch of an enemy. But Marius is more than just a warrior, and together they discover an impossible love. But when a revolution threatens their lives and places them on opposite sides, will they find a way to stay the odds, or will the Roman machine destroy them both?

This novel is a fabulous portrayal of life during the Roman era. Within the first few pages, Ms. Meador has you completely immersed in the time period, to the point I expected to find mud caked to the bottom of my socks. The energy between Delia and Marius flares up like a wildfire and Minnette keeps you perched on the edge, waiting for the moment when these two, proud warriors finally accept the spark between them and allow love to make the rules, knowing their fate might be beyond their control.

There are more twists and turns than a country road and I loved how the story kept me turning pages right up until the end. The horrendous brutality and the harsh reality of that time period at times left me shuddering. Ms. Meador pulls no punches when it comes to authenticity. Well- researched.

The Centurion and the Queen is well-written, sensual ride that won’t disappoint.

I'm hoping there'll be more to follow. Hop on over and check it out. There're some great contests and some fabulous books on the upcoming schedule.