Okay, so I'm going to say it...my boys are not politically correct. They say things that would offend some people. I'm not proud of it, but sometimes, even I have to laugh...offensive or not. It's kind of like the movie Zombieland...not politically correct but if you tried to take it strictly for humour, it had some damn funny bits in it.

Anyway, we're watching Ironman last night and the music starts playing for that song... I am Ironman....  they sing this...


I am the ice cream man
Running over fat kids with my van,
When they here my song,
All the kids come running along...

Yup...my boys. Not correct but damn, I near pissed my pants.
Posted by Kris Norris at 4:57 PM No comments:

So, the countdown is on. Two weeks left of summer vacation before it's back to lunches and teacher meetings. Spending more time in the truck than on my bike and back to weekends at the rink...endless weekends at the rink, sigh. I'm starting to question why I agreed to be the division manager for Bantam Hockey this year...yeah, I know. While a part of me is thrilled to be a bigger part of the organization, the other part is screaming—you dumb sod, you already live there!

But as I think about the upcoming change, I'm strangely drawn to questioning Twilight. Now, correct me if I'm wrong, but...hasn't Edward graduated from high school a thousand freaking times? I seem to recall a giant collection on the wall of all his 'caps'. So I'm thinking about the sanity behind this and frankly... what the hell?

Now, I'm not criticizing the book, so don't send me angry hate email. Seriously, I know it's an almost cult following, but I'm just saying...I have two teenage boys and I can vouch that taking cute teenage girls into account, not to mention the prospect of living forever, neither one of my sons would 'volunteer' to go to high school...year after freaking year. No way. Not going to happen. It's hard enough convincing them to attend the first time through...vampire or not, they wouldn't be going there for the next hundred years...just not happening.

To be honest, I can't see most teenage boys opting for this. I mean, there's got to be other options for a perpetual eighteen-year-old male...he'll face the same questions as to why he's still in school as he will out on a job so... why stay in high school? As I recall, it wasn't the greatest time of my life, so I'm thinking I'd be out of there, too. And wouldn't he rather chase after the hot 'just turned twenty' girls? He already lies about his age, so why not tell folks he's twenty...he's just got a baby face, like Michael J Fox did for years? Why high school?

Anyway, just thought I'd put that out there. A teenage boy who wants to go to high school forever...now that's the making of a good horror story.

Between the Veils: After Dark 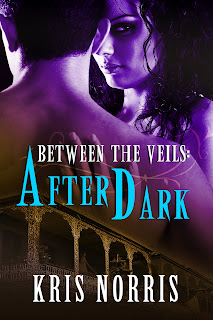 Today is release day for me. Book 1 of my new series with Resplendence Publishing is out today! And I have Authors After Dark to thank for it. Well, actually, I have the wonderful bloggers who attended the event to thank.

Way back when, I was asked to do a blog about New Orleans from the perspective of one of my characters as a promotional piece for AAD. Since I'd never been to New Orleans, and quite honestly, the only character I had that had ever lived there wasn't exactly a fan of the place, I decided, like a few others, to create a new scene that occurred in New Orleans. In fact, I ended up writing the entire first chapter to this book. I was so intrigued by the outcome that I decided the story couldn't simply stop...left hanging so to speak. So I proposed a new series to my editor and well...here is book 1.

I think what intrigued me most about the dubious first chapter was that I'd planned on the having a different hero. The main lead... Avery Smith... was going to be this spoiled rich kid asshole... then I got to the scene with the demon and bam....all of a sudden Avery's the hero and is bound on being redeemed. I love it when a story just surprises you like that.

Anyway, if you like ghosts and demons, this might be up your alley. Oh, and there's a fair share of hot loving, too... here's the blurb and a quick excerpt.

Temperance Dunnigan can’t believe she’s agreed to travel to New Orleans to be part of Avery Smith’s special ghost hunting squad—and in the midst of Mardi Gras no less. There isn’t a sane reason to be there…other than Avery. Though she considers him a spoiled, rich kid, his money is her ticket to finally getting some concrete evidence to lay the eternal question of spirits to rest.

Avery didn’t think twice about inviting one of the foremost paranormal investigators to his retreat. After all, Temperance is smart, daring and totally not his type. He’s more than aware of her feelings toward him and embraces the chance to work with someone he has absolutely no interest in…that is until she becomes entrenched in a deadly summoning. Saving her life wasn’t part of the plan and now he can’t stop his heart from racing every time she looks at him. They’ve got one week to figure it out before all hell breaks loose, and Avery loses more than just his reputation.

And a sneak preview...

Hope you enjoyed the book...

Posted by Kris Norris at 1:19 AM No comments:

First off, we will not discuss how this is about my third blog of the year...no, that is the subject that won't be named. I have a renewed desire to make blogging an active part of life, but hey, it's day 1 on blogger rehab so... let's be optimistic for now.

Anyway, I just got back from Authors After Dark in New Orleans...which I assure you is a completely separate blog... and my youngest son made me nearly pee my pants.

While I was away, my two teenage boys were at a Hockey Ref Camp. I get home and my youngest, Jared, is chatting away about what they did and how much fun they had, but then starts in on how much his muscles hurt... this is pretty much the conversation....

Jared: Man my stomach hurts, my legs hurt. I think all my muscles hurt.

Me: That's because, shockingly, you had to move your body for a week.

Jared: It's because they made us run.

Me: You know what the say... Pain is just weakness leaving the body.

the boy looks at me with a smug grin on his face and says... oh yeah, well sweat is just fat crying.

To this I could only laugh until I cried. I love teenage boys. And I can assure you that in New Orleans, any and all fat was weeping uncontrollably.
Posted by Kris Norris at 6:18 PM 2 comments: