And the Winner is...

Yes, it's the Summer Solstice and time to announce the winner of our Hot Summer Solstice Contest. The grand prize is winner's choice of either a Nook 3G plus Wi-Fi or a Kindle 3G plus Wi-Fi. We want to thank all of those who entered. We only wish we could give everyone a fabulous new ereader to kick-start their summer, but I'm certain there'll be more chances to win as winter claims the land.
But for now... the Grand Prize winner is...
Erin Cavin - Who gets the ereader of her choice and 12 books... Sacred Talisman and Twice Bitten from me.
Our Second Place Winner, who gets 2 books from each author is...
Theresa Angelosanto - she chose Deadly Vision and Deadly Obsession.
And our Third Place Winner who gets a book from each of the 6 authors is...
Tracey D. - who receives one of the 'Til Death books.
Congrats! Jessica Jarman will be contacting you so you all can claim your prizes. As for those who didn't win... I hope you have a fantastic summer. And to show my appreciation for taking the time to comment on my blog, here are 3 consolation prize winners, each of who will receive an ebook as per the comments.
And those winners are...
Carla
Drea Becraft
Sam Crescent
I'll be emailing you all immediately to see which book you want and what format you need it in. Thanks to my kids for each picking a number. I hope you visit again soon and keep your eyes open as the snow begins to fly and the year comes to an end, we'll be launching into another great contest.
Posted by Kris Norris at 12:24 PM 1 comment: 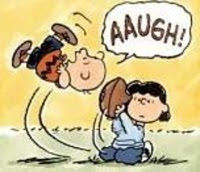 Okay, so have you all seen Charlie Brown... remember how he just keeps trying to kick that football, but Lucy always pulls it away at the end, even when she says she won't? Yeah, that pretty much sums up my day.
It started off with phone calls at o'dark thirty... apparently kids only listen when you tell them if they want to set up play-dates, they need to call early or they might miss me... yeah, not that early pumpkin, but... they didn't miss me.
Then it was off to the airport... for a second run. Somehow, a flight was missed yesterday, so we got to redo the event again today... lol. Then it was repeat shopping because apparently, not everyone had received the "I'm going shopping now!" memo, and we required a second round.
But, I got home and was all ready for my long, late-afternoon ride with friends. It was a great day, not too hot or too cold. I took the dog first, so she got a run in, then we all headed out together... we got just far enough away to make it feel as if we were going places when I got a flat tire. Now don't get me wrong. Going through, over and around all the stuff we do, I expect to blow the odd tube, but I really hate when it's the back tire. Having the gears there just seems to make it more difficult. However, my gal pal and I thought this was perfect training for our race...we need to be able to change flats and some other stuff on the trail. So I got out all my tools, turned the bike upside down, got the wheel off... then nearly died trying to get the freaking tire off the rim.
I did everything... had three tire levers and still nothing. Finally, we managed to get it loose... and take out the old tube and put in the new... got it back together... which was almost as freaking hard as getting it off... only to discover the tube wouldn't inflate.
My gal pal's hubby finally rejoined us and he gave it a try. We're now on the second new tube and he gets it all together. I ride five feet and yup... another flat. It's obvious that there's something in the tire making it flat, but despite running our hands and fingers over the tire, the rim... everything.... we can't for the life of us find anything remotely sharp.
So, this the is the part where I get to run the bike home because running your bike is obviously good practice. We've now wasted a bunch of time, but we're still optimistic... If I can get back, I can grab my old bike (yup, the one my oldest son just broke the hydraulics on so I have no back breaks... but hell, I'll take anything at this point) and we can still salvage some sort of ride.
Well, the stars weren't in alignment. By the time I jog home with the bike and get the other one, we've run out of time. Clive is determined to find the source of my flats, Andrea has other commitments and I have just enough time to go to the bike store and say WTF?
I hitch up my 'hitch', lol and strap on the bike... drive to the bike shop where I bought my bike and take the remains into the pros... Now I have to give the guys credit. They did try not to laugh as they explained... there's a certain technique to my new, highly advanced tires that enables you to get the tires off without ruining them... yes, I've killed the tire and will now need to replace both of them, cause you can't run two different types of tires and didn't you know, they don't have my old ones in stock! (insert deep breath here). Apparently you have to 'pop' the seal on the tires... it's almost as if they are glued to the side... before you can get them off. Yeah, that would have been nice to know when I bought the bike. But, two new tires and a new tube later, I'm back in riding shape. At least for tomorrow.
So, thanks Lucy for pulling out that football over and over today. I enjoyed getting grease on my hands and repeating the truly mundane things in life. Here's hoping tomorrow goes a bit more like planned... though chaos does rein in my house.
Posted by Kris Norris at 7:53 PM No comments:

Hi, and welcome to my blog. I'm sure for most of you this is your first visit, though I hope it's not your last.
Please feel free to poke around, though I know you're all here for the main event. So without further ado... here's what's it all about.
And now that I've got your attention... here are the fine-line details.
Six sexy authors of erotic romance are coming together with a fabulous giveaway this summer solstice! And entering couldn't be simpler. Just visit each of our blogs beginning June 14th, and leave a comment on the contest post with:

* your name (or user name) and contact email, and
* your top two (2) choices from the author's backlist to kick-start your E-Reader library should you win.

Contest will close at Noon ET on Tuesday, June 21st, 2011, and a winner will be drawn at 1:16pm ET from all the readers who commented on all six blogs:
Gwendolyn Cease at Gwendolyn Cease's Blog

The Grand Prize winner will receive their choice of a brand new Nook Wi Fi 3G or a Kindle 3G with Wi Fi plus two ebooks of their choice from each author!

Second Prize will be winner's choice of two ebooks from each author's backlist...that's 12 new books!

Third Prize will be winner's choice of one ebook from each author's backlist for a total of 6 books!

More surprises and prizes at each blog, so what are you waiting for? When summer hits its height, you could be the winner!!

* In order to be eligible for the drawing, you must leave a comment at each of the six blogs with your email address and choice of two books. We're sorry, but anyone who misses a blog or forgets to leave their contact info will be disqualified.

* Valid entry comments must be in response to the official Contest post on each blog, although we also welcome comments on other posts, so feel free to poke around!

* Winner must respond to Jessica within three days or an alternate winner will be announced.

*******
So here we go! Check out my books and decide which two you want! There are links by genre just below my blog header, which will take you to a page with all the blurbs. You can also click on the covers along my left sidebar to go to the publishers' websites for blurbs, excerpts and reviews. I'll also be drawing a few random non-winners for extra prizes after the contest is over. :D


To enter, just comment below with your name and contact email and which two of my books you would like to win! Optional to add, do you have anything you are really looking forward to this summer?? Then visit the other five blogs and cross your fingers!

As many of you know, I have three kids...two boys and a girl. My kids are getting older... Kyle's already a teenager and Jared is just one year away. Even Sydney is going to be starting her last year in the single digits... when the hell did they get so big?
Anyway, Jared had a book report due the other day, but it wasn't your regular kind of report. His awesome teacher likes the kids to mix it up. They were given several different options of reports they could do, and were only allowed to hand in one report per style available. Last time, he made a model of the room the book centres around, so this time, he turned to a more technical approach.
After watching me make book trailers for my novels, he decided he'd like to hand in a book trailer for his report. So, we sat down together and I watched my son turn from reluctant pupil to star movie maker in a matter of minutes. All it took was me opening up iMovie and dragging one image onto the screen...he was hooked. He sent the next few hours choosing images, music and writing the text. It was inspiring to watch. All I did was help with the actual program, but he'd even figured that out by the end.
So... without further ado... here is Jared's creation for the novel Percy Jackson and the Lightning Thief.
Yes, he did pick out pictures from the movie, but I think it was a stellar first attempt. And if it makes handing in book reports more enjoyable... I'm all for it. If you're wondering how he handed it in, well, I saved the movie onto the iPad and he took that to school to show his teacher and the class. It was a great hit.
So congrats Jared on a job well done!
Posted by Kris Norris at 10:51 PM 5 comments:

Hi All,
I know... I've literally fallen off the planet, but... I'm trying to make my way back. My fellow author friends and I are running a new contest to celebrate summer. Bear with me as I try out new banners...
Posted by Kris Norris at 3:12 PM No comments: