Well, we got the news. Kyle got into the Highland Hockey Academy for next year! Yup, doing the snoopy dance. I even went in this week and put in his course preferences and did the whole registration thing. Now he just has to motivate himself to keep up this year, lol. What is it with boys.. and yeah, in my house it's the boys, and the not wanting to go to school, or wanting to do anything but a bit of homework? I swear, if he spent half the time doing it than he does fuming over it, it'd be done... but try to tell that to a teenager.
But, on the bright side, he knows that he has to keep up next year or they can ask him to leave the hockey part, and he's really looking forward to that.
In other news... my car is still in the shop. Who knew it would take so freaking long to fix it. And to top it off, the car I got to drive as a replacement... it's a freaking Toyota Yaris!!!!!! Now, I'm not dissing a free ride and hey, it's not a bad car, but... I drive a 7 passenger SUV and sometimes I barely have enough room. This thing... it could fit in the back of my gal pal's truck! I think the only cars smaller are those 'smart' cars... can you imagine, on the weekend I had 4 kids and me in the car... so yeah, it's packed full... 2 hockey bags and a ref bag! Man, I should work for a packing place because you can't believe how I stuff it all in. And it that's not enough, this weekend we all have to go to Vancouver for a ringette tournament. So... there's going to be 4 people, 2 hockey bags and goalie equipment, and... you'll love this... the dog. Yup, gotta take the dog. Well, at least we'll get good mileage, even if I can't see out the back window.
Posted by Kris Norris at 3:37 PM No comments:

First, I blogged today over at the Gems' blog. Would love for you to come and check it out.
Second... what the hell? I'm not sure what I did to the karma Gods, but damn, they are kicking my ass lately. And not in a way remotely arousing. I know my elders always said trouble comes in three—I'm sure this must be a biblical reference, but hey, three always seems to be the number. Things are funny in three, are grouped better in three... there's just something with that damn three. Anyway, I'm hoping this is true, as I've certainly had my three.
First, just over a week ago, my daughter and I were watching TV in my room. I had planned on watching Lie to Me (love that show) but Syd wanted to watch one of hers, so I relented. I was supposed to be working anyway. So she's watching her show and all of a sudden we hear a hissing sound. We glance at each other then notice the TV picture is going funny. We stare for a few seconds then I ask her... is that smoke coming out of the TV? Sure enough, the damn thing is on fire... yeah... right there in the bedroom. So I jump up, unplug it and open the window in case I have to toss the freaking thing out... and I would have... while telling Syd to get her brothers and the fire extinguishers. The boys come running, armed with white foam, but I manage to get the thing outside before we unleash one of the extinguishers on it...it's still sitting out there in my driveway like a voodoo doll or something, all covered in white just staring at the house.
Then, a few days later, my dad has to be rushed to the hospital. Now, he's okay, but it's the last straw that he can't live on his own any longer and be 3000 miles away. I'll be heading to Toronto shortly to deal with that... my brother is there now... but I'm not looking forward to convincing the man he needs to move... now.
Finally, this past weekend, I crashed my car... all I'm going to say is 5:30 a.m., dark, slippery roads and a herd of deer do not make for a good scenario...now the car is in the shop and I'm left wondering what I did to stir up all this bad juju...
So if you're wondering why I'm not on here much, well—I'm hiding. I don't need to set off another round of three.
Posted by Kris Norris at 9:40 PM No comments: 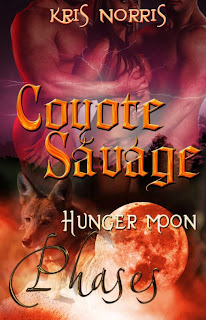 Well, it's the big day. My first ever shifter book is finally here. And what a sexy pair of shifters they are. But before I dive in with the blurb and excerpt, here's the background of how this book came to light.
So quite some time ago, I actually shudder to think it was probably about a year ago, my fab gal pal Bronwyn Green calls me up and asks me if I'd consider being part of a collection of books with five fellow authors. To be honest, I had 'count me in' out of my mouth before she even told me what the collection was about. Of course, it's not because I'm eager or desperate or anything—so not that. Okay, maybe a bit, but, once she told me what it was all about, I knew I'd made the right choice. And so, Phases was born.
Phases is a collection of stories in which each author writes two stories—about 20 to 25K—that correspond with different monthly full moons. I think most of us have heard of the Harvest Moon, or Wolf Moon, or even Blue Moon (which is the second full moon in a month - who knew) but I didn't realize that every full moon was named for the month it was in. Anyway, I was given the months of February and July, and thus the Hunger Moon and the Thunder Moon. Now for the stories, the only other requirements were that at least one character had to be a shifter (any real animal was up for grabs) and it had to involve some kind of ménage. And we had to tie our stories into the full moon.
After jumping at the chance, I have to admit that when it came time to choose my shifters, it wasn't so easy. I mean, there's the usual, like wolves, but I wanted something different... and animal that was more of the underdog, and thus, coyotes were it. Now coyotes tend to be shunned and at times hated by humans, mostly due to their ability to survive. Despite concentrated efforts to rid the earth of their infestation, they've learned to adapt and to smell trouble a mile off. Unfortunately for my shifters, trouble is in the form of their mate, and they have no choice but to jump headlong into it.
So, without further ado, here's the blurb and a quick excerpt of my new book, Coyote Savage: Hunger Moon...
February's full moon is rising, only this year, it's bringing a new brand of hunger...
For coyote shifters Caden and Talon Brady, the upcoming hunger moon has ignited a different kind of appetite. They've been waiting several years for a chance to court their intended mate, and now that she's finally in their sights, they'll stop at nothing to win her over. But when local livestock start disappearing, their coyote refuge is put in the hot seat, and more than just their way of life is suddenly in jeopardy.
Sheriff Rebecca Savage never planned on returning to Beckit Falls, or for falling for two handsome men. But fate seems to have different plans for her. Unfortunately not all of them are sexy and look fantastic in jeans. The local mayor is trying to run the Brady boys and their coyote refuge out of town. Nothing seems to make sense, but when she starts digging deeper, a new danger rises with the full moon—one that just might get them all killed.

Caden Brady skidded the truck backwards then headed down the driveway, slamming his hand on the steering wheel. He saw his brother wince out of the corner of his eye, but it didn’t matter. He knew Talon was just as pissed as he was, the only difference was that Talon was still thinking about getting into Rebecca’s pants, instead of worrying about how they were going to stop good, old Mayor Carson from stealing their ranch out from underneath them. The man had been hounding them for nearly two years, and if this latest stunt got enough public support, he might just succeed in getting their refuge permits revoked and their ranch closed down.

“You know, Caden, if you don’t stop frowning like that, your mouth might stay that way. And you’d look pretty stupid in your coyote form with that look stuck on your snout.”

Caden huffed and gave Talon a hardened stare. “Perhaps you should spend more time thinking about how we’re going to stop Mayor Carson from stealing our land and a bit less about how you’re going to convince Rebecca to join us in bed.”

Talon shrugged, glancing at her Jeep following close behind. “Go ahead and brush it off, but I know you feel the pull of the moon as much as I do. Hell, it was all I could do to scent the kill site over Rebecca’s pheromones, and even then I was too distracted to decipher anything remotely useful. It’s mid-February—the height of mating season—and it’s been forever since we even had sex, let alone thought about taking a mate.” He nodded at the slight tremble in Caden’s hands. “It’s time to face facts, bro. Either we find a way to get Rebecca to see us as more than just a couple of awkward teens she used to know and accept us as her mates, or what happens to the ranch won’t really matter…we’re dying inside without her.”

Caden sighed at the hurt expression on Talon’s face, looking back at the endless white road. They’d known years ago, when Rebecca had first moved to town with her father, that she was their intended mate. But being eighteen with their shifting abilities still new, they hadn’t been able to do more than watch her from afar before she’d headed off to university.

He grunted, choosing not to meet Talon’s gaze. “Well, if you have any suggestions, I’d love to hear them. Otherwise, it’d serve us better to get our heads out of her pants and on the task at hand.”

Talon growled. “I swear, if Darrin puts one finger on her—”

“We’re not about to let anything happen to her. But if we want to keep her safe, we need to know why Carson and his son are so hell-bent on getting our ranch. I just can’t see his hatred toward coyotes being his only motivation. I think he’s using it as an excuse—one the town council will believe.” He gave Talon a sly smile. “You know how much folks here distrust coyotes.”

Talon nodded toward Rebecca’s Jeep. “From the way Darrin was talking, it doesn’t sound as if Rebecca shares those views.”

“Well, we’d better hope she fucking loves them, or there’s not a hope in hell she’ll agree to sleep with us.” He shook his head. “Damn, I don’t even know if she’d be into two normal guys at once, let alone a couple of misfits like us.”

“Only one way to find out.”

Thanks for dropping by, and look for the next story in the series, a sizzling M/M by Mia Watts.
Posted by Kris Norris at 5:45 PM No comments: