And the winners are...

Hi all,
Just wanted to take a moment and thank everyone who entered my Christmas contest this month. I had two lovely angels draw names and the lucky winners are...
Cathy MacDonald who won a copy of Deadly Vision
Tracy Meadows who won a copy of Sacred Talisman
and Rachel Morse who won a copy of Centrefold.
Thanks to all who entered and I wish everyone a very happy holiday season.
Cheers,
Kris
Romancing life...one adventure at a time.
krisnorris.ca
Posted by Kris Norris at 11:31 AM No comments:

I just received the first review for Sacred Talisman. Here's what Dawn of Love, Romance and More had to say...
SACRED TALISMAN is the first book centered on talismans and the power it holds. Ms. Norris does a wonderful job weaving a story around the reader that they totally forget their surroundings and become involved in the mystery behind Terryn’s Talisman. I loved the dynamics between Terryn and Rafe, especially as the sexual tension strumming between them is so hot it almost melts the screen. There are many twists and turns to keep the reader captivated and flipping the page to see what happens next. Ms. Norris deftly weaves her story of vampires, powerful talismans and simmering passion with an ease of her keystrokes in SACRED TALISMAN. With some intriguing secondary characters, this author kept me glued to the pages, eager for more... If you haven’t picked up SACRED TALISMAN, then do so. It is a different paranormal story that will keep you glued to the edge of your seat.
If you'd like to read the entire review, click on the link above. Thanks to Dawn for making my first review experience a pleasurable one.
Cheers,
Kris
Romancing life...one adventure at a time.
KrisNorris.ca
Posted by Kris Norris at 3:55 PM 3 comments:

Wow. What a couple of days. Unfortunately, I'm way behind in my posts. So, I'll throw a bit of Centrefold at you today and try to get some of Checkmate out tomorrow.
I made a new book trailer for Centrefold. Take a lookie and then check out the juicy excerpt after.

Then they’d spent the next four hours scoping the mansion, chatting up the women and searching for clues. Roman had managed to sweet talk one of the maids into allowing him a quick glance at Glade’s office, but nothing they’d found had turned up any leads. Now they were banished to their rooms while Glade prepared his usual extravagant dinner. God, she hoped the man wasn’t planning a spanking contest or she just might need another bath.

Scarlet smiled at the thought, dragging her tired body from the water. She still wasn’t sure how to take the sudden change in lifestyle. Admitting her love for Roman was easy, but her feelings for Aiden confused the hell out of her. She wasn’t one to believe in fairy tales or magic, but every time he smiled at her, or ran a gentle hand along her thigh, butterflies fluttered to life in her stomach and her chest tightened. It was the greatest high she’d ever experienced, and somehow, walking away didn’t feel like an option anymore.

“This is one crazy Christmas,” she said, grabbing a towel. She fisted the door, cracking it open only to have the breath rush from her chest. Aiden leaned against the wall, naked, muscles rippling, head pressed back as pleasure twisted his expression. His lips were pursed together. His eyes clenched shut. He’d tangled his fingers through Roman’s hair, as the man moved between his legs, feasting on his cock as if he’d never tasted anything quite as delicious.

The words sprang from her lips and she hadn’t realised she’d spoken until both sets of eyes turned in her direction. Roman pulled back, allowing Aiden’s shaft to slip from his mouth, the heavy length held like a sword in his hand. His lips were wet and swollen, and just the sight of them pooled liquid between her thighs. She moved towards their outstretched hands, linking her fingers through theirs.

Aiden planted a hot, wet kiss on her lips before moving to her neck, nibbling at the sensitive spot behind her ear. She arched into him, meeting Roman’s heated stare.

“I’ve been wondering. Do you both…” she waved her hand at their erect shafts. “Give and receive?”

Aiden chuckled against her skin, making it prickle. “I didn’t take you as the shy type, baby.”

“Roman prefers to be the one fucking, but yes, we both fuck each other.” He raised his eyebrow. “How does that make you feel?”

“Curious.” She stepped back and waved at the bed. “Show me.”

Roman pushed up, trapping her against Aiden’s chest. “Pardon me?”

“You heard me, Roman. I want you to show me.” She trailed her fingers down his chest, scrapping his skin until she circled his cock. “I’m still trying to wrap my head around how I fit into all this. You love each other, but you say you love me…”

“We do love you,” he interrupted, framing her face with his hands. “You’re not just a toy to us. You’re our soul. A fact these past few days has made very apparent.”

“Then let me share what you feel for each other.” She tilted her head against Aiden’s chest, allowing him to tug the towel free. “Please. I need this.”

The men exchanged a look, and she wasn’t certain they’d conceded until Aiden nipped at her neck, urging her forward with a pat on her ass. “All right. But it’ll cost you. We’ll let you watch, but next time, it’ll be you between both of us.”

Thanks for watching and reading....

Well, this is looking to be possibly the biggest week ever! For me, anyway. I have two releases coming out this week. Tomorrow, Centrefold hits the electronic shelves as part of TEB's Christmas Crackers collection. Then, on Tuesday, Checkmate debuts over on Resplendence Publishing. It's my first release with RP and I couldn't be more thrilled.
I'd love for you to mosey on over and take a peek. I'll post an excerpt for Centrefold tomorrow and Checkmate on Tuesday.
Thanks all,
Kris
Romancing life...one adventure at a time.
KrisNorris.ca
Posted by Kris Norris at 11:16 AM 2 comments:

Hey all. Well it's Friday again, so I'm trying to keep up with the Friday Flash. Here's a bit of December cheer for you...

She smiled at him, rising from the floor. He didn’t give her time to kiss his open mouth, but turned her in his arms, and lowered her onto the bed. She opened her legs the moment her ass touched the mattress, releasing a waft of warm arousal into the air. He groaned at the scent. Eating pussy was one of his favorite pleasures, and hers was more than tempting.

“You are wet, baby,” he mused, drawing a finger through her silky folds. “Good thing I’m hungry.” He spread her legs farther apart, wanting to see every inch of her plump lips as his fingers disappeared into her tight sex. “Reach down and hold yourself open, so I can use my fingers for other pleasures.”

“Why do you like watching me touch myself so much?” she asked, a hint of irritation in her voice. But even as she posed the question, her fingers slid down her stomach and eased between her lips, pulling them apart.

Sorry this is a bit late, but hey, that seems to be my style lately. Have a great weekend.

Hi everyone.
Just a quick note to let you know I'm popping over to fellow author, Tina Holland's Blog this week. She's already got Deadly Vision's book trailer up and there will be a full-fledged interview on Thursday. You never know what you might learn about me (blushing). Please drop by and leave me a message. I love hearing from everyone.
Cheers,
Kris
Romancing life...one adventure at a time.
KrisNorris.ca
Posted by Kris Norris at 5:08 PM No comments:

Hi everyone.
In celebration of the Holiday Season, I'm holding a Christmas Contest and giving away a copy of both my new Christmas Cracker story, Centrefold, and a copy of my previous release, Deadly Vision. To enter, simply send an email to contactme@krisnorris.ca and in a line or two let me know what kind of promotional tools grab your interest towards a new author? Do you simply go by the blurb and excerpt? Or do you look for things like reviews, contests, book trailers or bookmarks and business cards? In the subject of the email write... Christmas Contest.
Winners will be drawn at random on December 21st and notified via email, so please remember to include your real name and a valid email address. You will be given a VIP account with TEB and be able to download your book via their website. 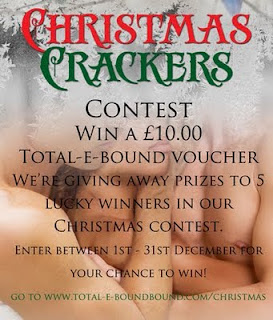 I'm also happy to announce that TEB is also holding a Christmas Crackers Contest. And as my new short story, Centrefold, is part of the Christmas Crackers Collection, I'm pleased to provide information on this fabulous contest. Just go to the TEB Contest Page and follow the directions to have your chance at winning a gift certificate. There are so many brilliantly written books available at TEB, your biggest problem will be choosing how to spend your money.
Happy Holidays and please have a safe and fun-filled Christmas.
Kris
Romancing life...one adventure at a time.
KrisNorris.ca
Posted by Kris Norris at 12:55 PM No comments:

Well, I suppose as of today I am officially an author. Yes folks, my first book has arrived on the Pirate shelves of scum-laden websites that feign ignorance, all the while promoting and yes, supporting, ebook piracy.
I'm not sure whether this means my books are good or are they're just convenient. Another token someone thought they'd post. It seems Deadly Vision has caught at least one reader's eye as that special someone has uploaded it as a free download.
So what have I done?
Well, after a rather direct and nasty letter to the user involved, an abuse file made on the site and a file created with the F.B.I.'s crime centre, I've sat here fuming. Not so much that someone thought to share the book, but at the pure selfishness and cruelty of the human race. Since when did folks think that sharing books for free was okay. Who neglected to tell them that piracy is a crime, whether it's uploading music, videos or books? Didn't these folks have parents who frowned upon such theft? My sure did. And I have yet to pirate a song or book. Yes, I'm one of those people who buy their ipod songs from itunes and gladly fork out the equivalent of a cup of java for a good book. But it seems some people don't feel as I do.
So, I'd like to take this opportunity to thank all the readers who do so legitimately. Who spend the five dollars to enjoy their books. I appreciate the loyalty of these folks and commend them for standing above the crowd. Your readership is paramount to all writers.
As for the pirates of the world? I can only believe that with vigilance, they'll receive their just rewards...a rather hefty fine and time behind bars. Either way, it is a war worth fighting.
Regards,
Kris
Romancing life...one adventure at a time.
KrisNorris.ca
Posted by Kris Norris at 12:07 AM No comments: