No thanks… I'd rather play with clowns…

So... once again it's Wednesday. And it's my first post since last Wednesday. Small steps, people. At least I'm making every Wednesday. And believe me...I have a shit ton of stuff to do. So the fact I'm making this weekly blog makes me smile. Nothing like pressure and deadlines :)

Anyway, this week's topic with is... You Couldn't Pay Me To…

First off... where the hell are you gals finding these topics? And can we go back to who I'm crushing on? I know I could come up with more names.

Fine. We'll go with the topic. Things you couldn't pay me to do. But first, here's a couple of pictures of Anson and Keanu...just cause I know you want to see them. Well. Can I just say…most things, and leave it at that? Okay, I'm not that bad, but I wouldn't change what I do for anything. But I guess that's not quite the same as saying you couldn't pay me to do stuff. Because yeah, if you paid me a million dollars I'd have done an episode of Mike Rowe's Dirty Jobs...all those disgusting things...ah shit. Now there's a guy I crush on and didn't put in the list. Let's see a picture of him, too. 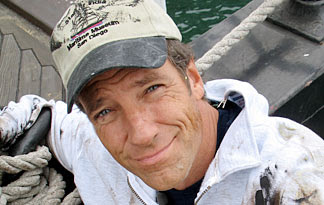 1 - Be a clown... no explanation needed here. Move along people. These are not the droids you're looking for.

2 - Bungie jump... Now, don't get me wrong. I'm not a frightful person. Really. I like having to sign a waiver to do something. I rock climb. Mountaineer. I'm not afraid of roller coasters or of flying (obviously, lol) But jumping off a bridge with a rope tied to my body. Seriously people—who thinks this shit up? Did folks just get tired of tempting fate by landing in the water when they jumped? Why not up the anti a bit by going head first and just grazing the surface before getting yanked back by your feet. Yeah, not paying me to do that.

And let's just say, I could put in parachuting here as well, except—while I wouldn't do it for fun. If the plane was on fire, I'd be the first one slapping one on my back. So you could probably pay me a few million dollars to try...

3 - Live in a big city... okay, I know for lots of people, millions really, they thrive on this. Places like New York, LA, Miami, Tokyo... there's a reason folks dream of going there. But not me. I would honestly hate every single second of living in any place like that. I need open spaces. Quiet. I love the fact I can run for miles every day and never see another person. That when I leave my windows open it's the damn birds that drive me crazy. Or the frogs. That there are seas of endless trees as part of my daily drive. So yeah. No amount of money in the world to get me to live somewhere like that. I'm a country girl. Period.

4 - Hunt... Okay. If the apocalypse happens and it's eat a squirrel caught my Daryl and his crossbow, maybe you'll be able to talk me into it. But I mean now. In the non-zombified world we live in. Nope. You couldn't pay me to do it. I'd agonize over it for years. Not saying it's wrong. That people who hunt are evil. Not at all. I'm just saying you couldn't get me to do that.

5 - Do any kind of work/interaction with spiders…again, this needs no elaborating. They are satan's snowflakes. And the only good kind of spider is a dead one. My skin is crawling just thinking about it.

6 - lastly...eat disgusting things like in the fear factor shows. Have me jump from a moving train onto a car while strapped in. Repel from the top of a building (that's not the same as bungie jumping... not at all) but you could not pay me enough to eat the brain of a cow. (hello, that could be how the zombies get made...mutated mad cow. Just saying. We need to prepare people). Or bugs. Just…no. A hundred times no. Keep your millions, I'd rather be poor.

The list could go on. I'm sure I'll see other replies and be like...shit, I wouldn't do that either. But that's all I got for now. Please jump on over to the other lovely girls of Wednesday Randomness and see what money CAN'T buy.