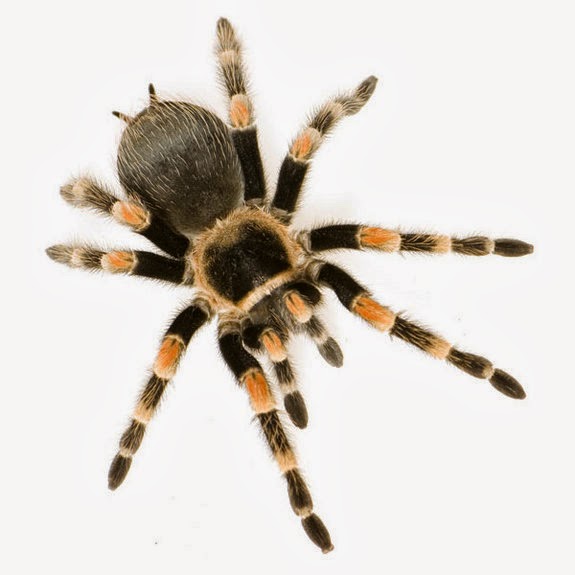 Whenever folks talk about phobias or fears, I always think of Yoda and Luke in that scene in Star Wars where Luke is outside that cave. And he says to Yoda… "I'm not afraid." And Yoda says, "You should be. You should be."

WELL...never fear, Yoda, oh master, I'm not afraid to say I'm afraid! Of some things. But in my defence, some things are just downright creepy. And they should be feared.

Okay, I'm sure you can guess by the image my number one fear. Only this is truly a phobia. It's not rational. Not in the least. I know…spiders are small. I can easily kill one. And yeah, it's not like they 'attack' people or hunt them, but seriously! Why do you need 8 FREAKING EYES! AND LEGS! What the hell is with that? And the way they move…all skittering across the ground! OH MY GOD.  My friend, Bronwyn, yeah... I'm sure she'll have something in her post about these lovely creatures...but she calls them Satin's Snowflakes. I think that's the perfect description. In reality, anything with more than 4 legs creeps me out. Bugs of all kinds. I hate them. But spiders…they make me scream like a little girl. And can I just say, there's a reason I have teenage boys.

I have one other phobia that rivals spiders…CLOWNS.

Now, I don't care what people say. Clowns are creepy. They steal your soul when you stare at them. I'm serious. They aren't natural. That puffy hair and big red nose! And all that face paint! Shit. I hate even thinking about them. There's a reason they are portrayed poorly in horror movies…Poltergeist and Stephen King's IT are two that pop to mind. They lure kids to their death. I believe even Supernatural had an episode about them. And yeah, it was as creepy as you think it was.

On a note. I'm not talking about rodeo clowns. For some reason those good ole' boys don't bother me. I think it's because they dress differently and and don't do the big hair and stuff. And they save cowboys, so…I like them. But circus clowns. They are just plain wrong. (of course, if you are a clown, I'm not saying you, personally, are an evil incarnate of some kind of demon... I just don't like clowns)

Wow. I'm sitting here trying to think of anything else. I can tell you some stuff I'm not afraid of. Snakes, water and the dark. They don't bother me. I'm not afraid of open spaces, or closed spaces. Bats don't bug me. I'm not afraid of bridges or the fog. The idea of aliens don't freak me out and I love thunderstorms. I don't like odd sounds in the middle of the night, but…that's more from years of watching too many horror movies. And a few too many seasons of Criminal Minds.

So two. Only two deep-down, stomach roiling, turn me into a screaming fool fears. Or really, phobias. I know they aren't justified…Clowns are probably very sweet people…but then that's why they're phobias. They aren't supposed to be rational.

Please join my fellow bloggers as they discuss their fears and phobias. You can find them below…