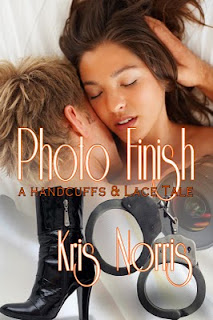 I'm sooo bad. Photo Finish came out two weeks ago and I haven't even blogged about it. I just have no time these days. Between squeezing out the last of summer with the kids, trying to get ready for school to start, the day job... and yeah, let's not talk about how long it's been since I wrote... well, blogging has gone by the way side. Maybe soon I'll be able to get back into it.
Anyway, I have a brand new book out and it's part of the Handcuffs and Lace collection. Here's the blurb...

Sometimes a picture is worth a thousand words, but this time, they all spell betrayal.

Photo Journalist, Paige Sommers, is out to get digital proof to put longtime arms dealer, Jason Tate, away for good. After losing her fiancé, Brogan Johnson, during an undercover operation with the same dealer six months ago, she’s finally ready to rejoin the world, and put an end to Jason’s rule. But when her zoom lens brings a familiar face into view, she’s not sure what to believe.

Special Agent Brogan Johnson is just a night away from bringing down the largest weapon’s dealer on the west coast. Having given up all connections from his previous life to go deep undercover, he’s willing to do anything to see Jason Tate brought to justice.... That’s until his ex-fiancé enters the picture, literally. With photographic evidence of the deal, she’s just placed her name at the top of Jason’s hit list. If Brogan can just get her to trust him one last time, they might have a chance at their elusive happily ever after.

I've also made a book trailer for it. I hope you enjoy the quick visual peek into the story.