OMG... Seriously, I'm totally stoked. Today is RELEASE DAY for my very first ever Self-Published book ~ RICOCHET. And it seems only fitting that my first solo project like this revisits my roots in Suspense/Thriller. Here's a bit about it... 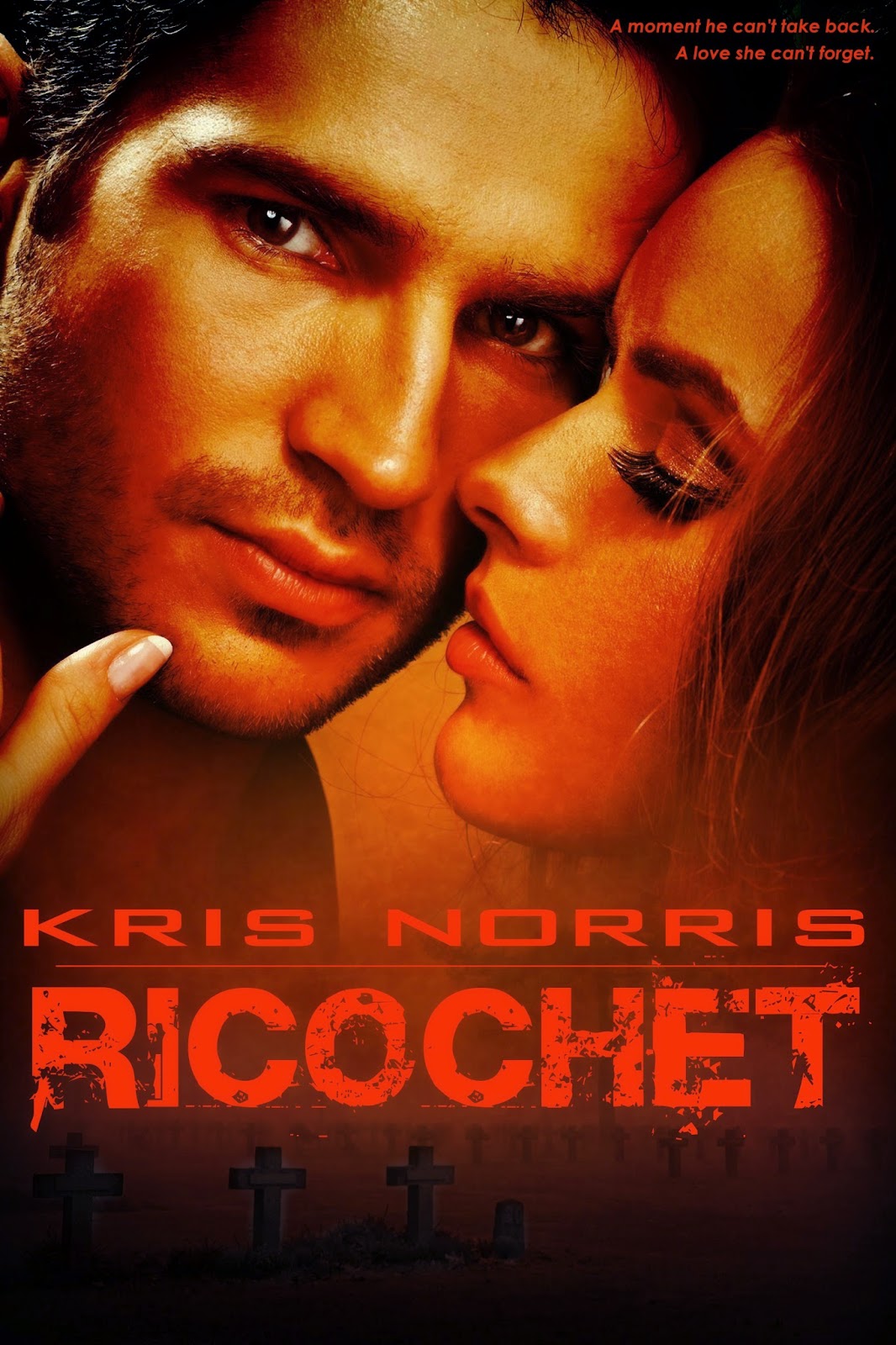 And other stores worldwide...

A moment he can’t take back…

An unlucky rebound has left US Marshal Ashton Kane broken. His partner’s dead and, consumed by guilt, he’s walked out on the only woman he’ll ever love.

A love she can’t forget…

Cassidy Ryan has tried to move on. Losing the love of her life cut deep, but she vowed she wouldn’t let it break her. And she’s finally taking back her life—until she stumbles upon a deadly encounter that threatens to destroy everything and everyone around her.

One last chance at redemption…

Ash has fooled himself into believing Cassidy’s better off without him—until she puts her life on the line, forcing him to face the demons that still whisper in the dark, or risk losing her. Again. Only this time, it’ll be no one’s fault, but his.

Ash bolted awake, arms thrashing, heart pounding. Images wavered in the darkness as Ben’s voice played in his head, the accusing tone grating on his nerves. Ash closed his eyes, focusing on drawing air in, then pushing it out, shaking his hands against the remembered feel of his gun. His skin felt tight, as if he were inside someone else’s body, fighting to get out. The lights flicked on a moment before the couch dipped beside him. He closed his eyes, mentally telling her not to touch him. Not to make him feel.
She kept her distance, a rough sigh sounding beside him. “Here. This might help.”
Somehow he managed to pry open his eyelids, staring at her outstretched hand. The brown liquid shimmered in the light, reflecting the pattern of wood on the ceiling.
He took the glass, tensing when his hand brushed hers, feeling his heart beat faster at the brief contact. Hell, just knowing she was only a foot away, her breath softly blowing across him, made him want to crawl out of his skin. Leave that man, those thoughts, behind.
He downed the shot, letting the warm liquid burn away the pain. But it wouldn’t last. Wouldn’t do more than mock the memories that lingered just beneath the surface. A temporary reprieve that would make the next round more vivid. More real.
Cassidy reached for the cup, allowing him to drop it into her hand. He didn’t miss the way her fingers trembled, nervously caressing the glass as if being this close to him frightened her. It should. It frightened him.
Another sigh passed her lips as she stared at him, the weight of her gaze making his muscles twitch. He held his breath, finally shifting his focus, cursing at the tears pooling in her eyes. It gutted him. Tore at whatever piece of himself still remained.
She waited until she seemed certain he wouldn’t look away. “They’re getting worse. You can’t even sleep for more than an hour without screaming. We can’t live like this, Ash.” She pushed her hand through her hair, tousling it about her head. “You need help. We need help.”
He gained his feet, crossing the room, needing the distance just to fucking breathe. The air felt too heavy. Too weighed down by her expectations, her needs. He stared out the window, watching the rain dot the glass, distorting the streetlights gleaming on the road.
“Ash. Please. I’m not going to tell you that I know how you feel. I wouldn’t insult you like that, but damn it…” She padded to the center of the room. “You can’t even look at me. I feel as if I’ve already lost you, and you’re standing five feet away.”
His chin bowed toward his chest, the truth of her statement hitting him hard. “I’m dealing.”
“You’re dealing?” Her voice rose in pitch, tears muffling some of the syllables. “How are you dealing, exactly? By pushing everyone away? By retreating so far inside yourself all you can see is the darkness? The pain?” More footsteps were followed by her hand on his arm. “Ben’s dead—”
“Because of me!” He spun, breaking her hold. “Ben is dead because of me. Because of the choices I made. Those are the facts.”
“The damn bullet ricocheted. It hit that fugitive’s skull and veered off. It wasn’t your fault. It was a freak accident. They’ve already cleared you—”
“You think I give a shit whether the Marshal Service clears me? Whether they deem it a clean hit? Justified? I killed my fucking partner, Cass. No one and nothing can clear me of that.”
She moved in front of him when he tried to push past her. “Don’t. Don’t walk out on this. I get that Ben’s death has killed something inside you. I know you’re hurting. But don’t shut me out. I’ve given you space. Waited for you to come to me. But you won’t talk to me let alone touch me.” She brushed at the tears that washed down her cheeks. Cursing. “I could have lost you. Do you know how many times I’ve died inside picturing that? Please. Baby. Let me help you.”
She reached for him, a gentle caress of her fingers along his arm. He clenched his jaw, closing his eyes as he fought not to jerk away. To give her just a small measure of what he knew she needed. She waited, seemingly judging his response until he looked at her again. Those blue eyes pleaded with him as she smoothed her hand along his forearm, stepping forward, her body slowly pressing against his.
His chest heaved, his lungs refusing to open, to draw in any significant amount of air. Panic crawled just beneath his skin, lurking. Waiting for him to weaken. Her scent surrounded him, the warm, sweet essence like a slap to his face. He didn’t deserve this. The forgiveness. The love.
Her head rested against his shoulder, her hands palming his ribs. Tears stung his eyes, the steady beat of her heart drawing him under. He didn’t resist when she led him down the hall, taking him into their bedroom. The bed shifted beneath him as he fell onto it, her body spooning into his. He stared at the ceiling, feeling her slowly give herself over to sleep. His gut clenched, the images taunting him from the shadows, and he knew he’d never be free.

I hope you enjoy reading this book as much as I did writing it. I can honestly say it's one of the best books I've written to date, and, I simply am in love with it. You can download the first few chapters from Smashwords if you'd like it to give it a go.