Pet Peeves—Or what turns me into the Hulk… 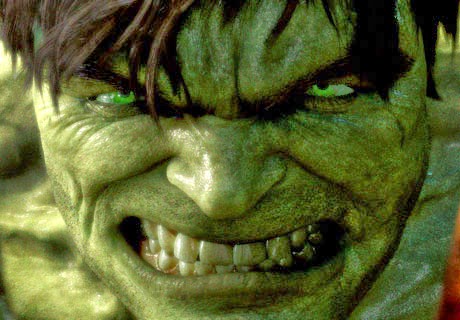 On more than one occasion, I've told my kids that they're lucky I'm not the female version of Bruce Banner, because this…the green version…would be me. And these days, I'd be green more often than not.

Now before I get on to what turns me into an anger management client in need of a therapist, I'd like to thank a few ladies who've let me hijack their weekly blog posts. In my need to try and blog more…yes, these posts might be the only blogs I do, but at least it's a start…they allowed me to join them on a different subject each week.  You can find their Pet Peeves at the following blogs— Bronwyn Green, Jessica Jarman, Kellie St. James, Tess Grant and Leigh Jones. Please hop on over and see if they react to any of mine.

So, I could go for the obvious as an author. Yes, the misuse of your and you're, 'til and till, is enough to make me go green, but I can overlook that if need be. I don't have to necessarily face it on a daily basis, and as I'm not the best speller in the world, and grammar can still defy definition at times… it's definitely a peeve but not Hulk worthy.

My first pet peeve—Drivers who shouldn't be driving! You know who you are. You drive 50 in an 80 zone then crank that baby up to over 70 when you get to the small town 60 zone. You don't signal when you're turning, and you cut people off because you just have to get one car ahead of me. There's a reason one of my family's favourite shows is Canada's Worst Driver. And I have a teenage driver. It's obviously a choice you're making.

Now let's not forget those folks that complain about everything, but won't step up and help out. Some of you may know that I volunteer for the local hockey organization. This was my second year as the Bantam Division manager, and next year I'll have both the boys as I move into Midget. So yeah, I put in a lot of time. But I don't mind. My boys love the sport and it's good to be able to give back. But there's always those few, select parents. You know the ones…they bitch about the schedule, about the teams, about anything and everything. Yet they never, and I mean never, volunteer to help out. You folks should just stop talking. Like now.

And don't even get me started on the parents and coaches who think it's fine...actually their right...to yell at the officials in a game. I can assure you, there's no reason that can justify you yelling at a teenage kid for a job they're doing to the best of their ability. I don't care if they missed a call or called one you think wasn't there. They. Are. Kids! (and head's up, jackass, you're not perfect in your job, yet I bet your boss doesn't stand over your shoulder yelling you to get your head our of your ass, or wake the fuck up! Yes, folks say this. They YELL this) I'd also love to know if you stand in line and scream at the checkout clerk if they type in the wrong product number and have to retype it? Do you yell at the kid in McDonald's if they give you a medium fry instead of a large? Why is it, people realize this kind of behaviour is wrong until they get to a sporting event? Here's some advice. It's just a game. Your child will most likely not be going to the big leagues and if I had to make you watch yourself in action, you'd be mortified. I'm embarrassed for you. So shut up. Can't make it any clearer than that!

My middle son is the best at helping me keep my cool. He's awesome. He tells me to breathe and rocks back and forth with me, lol. This is usually at the rink when some jerk is yelling at my other son. Of course, I can only take so much before I confront them, but still. For the sake of the post, I'll try to breathe...rock back and forth. Think happy thoughts in my happy place.

Right. Pet peeves. Here's another one that makes my eyes bulge out of my head. When they kill off a main character—no, not one I've just met. One I've invested emotional energy into. Who I've rooted for, fought beside. Watched bleed and keep going. Who's finally beat the odds only to bite it. And why? For ratings? For the shock factor? I really don't give a crap about either. I think sometimes authors and screenwriters forget that HOW a character lives is as important as the quick and dirty attention grab of killing them. And no, I don't just mean the Walking Dead, lol. I could name numerous books and shows that all fall into this category. So don't kill off the people we've come to love. Just don't.

Wow. I think I could go on and on. As in a never-ending list. Obviously, I have anger issues, lol. Actually, at the end of the day, I think these all come down to one problem. People lack COMMON SENSE. You know it's true. Common sense would solve many issues that drive us all batty. Like those kids that wear their pants down around their ass. Common sense says that you won't be able to run from the zombies, but hey. Guess that's Darwinism at work, too. So by all means, keep wearing them low, boys. The zombies will prove us all right eventually.

Common sense would tell us not to take up two spaces at the store because you have a big-ass truck. So do I, but I seem to be able to put it between the lines. Common sense says we should be tolerant. That acknowledging others have different beliefs doesn't mean it diminishes ours.

But that's the problem. There's a lack of Common Sense.

Okay...I'm going to stop before my blood pressure hits 200 and keeps climbing. Thanks for dropping in, and I can't wait to see what next week's blog will be. I hope they go back to the shuffle thing on my iTunes library. Though we all know there will endless Nickelback, I know there's more in there than that.