Arriving in PRINT—for the second time... 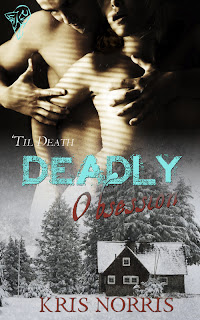 Yes, here it is Friday, May 21 and I haven't had time yet to blog about my new print release, Deadly Obsession. I know...I love e-books and still buy all of my pleasure reading books that way, but I'd be lying if I didn't say there was something epic about holding your own book...in flesh and blood.
Okay, so the book isn't of flesh and blood, but I am, and damn, I love holding it. On Monday, May 17th, Deadly Obsession hit the actual bookshelves...at TEB and AMAZON, and I couldn't be more thrilled.
And for those of you who don't know what it's about, it's book two in my 'Til Death series and one of my favourites. Here's the blurb and an excerpt...
He's blurred the line between reality and fantasy, bringing Brooklyn's imaginary world to life...and only one man stands between him and his deadly obsession.
Brooklyn Matthews is an erotic romance author whose life is anything but 'Happily Ever After'. With her marriage on the brink of disaster, it's time to face the truth...Gage doesn't love her, so why make them both suffer. But when she's viciously attacked during a routine book signing, she realises she's been given one more chance to get Gage back into her life. And she's not above using sex to do it.
Special Agent Gage Matthews can't believe his life has gone from spicy to sour in the space of a heartbeat. And all it took was one night...one mistake. Now, six months later, he's ready to sign away a decade of his life and while he isn't above righting a wrong, marrying Brooklyn wasn't wrong. But when an obsessive stalker puts her in the hospital, repeatedly threatening her life, will he simply play the role of the gallant knight? Or will he prove love, sex and happy endings aren't only for the pages of her books?

Brooklyn Matthews sat behind the table, pen poised between her fingers, brushing a stray lock of hair behind her ear. She stared at the crisp, blank page, listening to the woman ramble on about her sister and how much they loved reading her books.

“We’re your biggest fans,” the woman said in a heated rush, threading all the words together in her haste. “We’ve read all your books. I like Sarah’s Secret the best, but Marg, the sister I was telling you about, she thought Badge of Honour was better. Don’t get me wrong, I liked it too, but I still think this is your best work.” She paused to gulp down a large breath of air. “Do you have a favourite, Ms. Matthews?”

Brooklyn looked up from the flap of the book. She’d tuned the lady out ten minutes ago, and other than her name, hadn’t heard enough to even hazard a guess at an exceptional answer. She smiled, twirling the pen around her fingers. “Am I making the dedication out to you?” she asked. “Or did you say this was for your sister?”

The woman hesitated, giving Brooklyn a puzzled look, before flashing another exuberant smile. “For me…please. As I was saying, Sarah’s Secret is my favourite novel of yours.”

“That’s very kind of you to say,” replied Brooklyn, scribbling the same, sentimental words across the white paper. She signed her name, closing the book as she handed it back across the table.

The woman giggled with joy, clutching the treasured pages to her chest, as she rose from the seat and headed for the door. Brooklyn looked around the small store, relieved the steady stream of eager fans had dissipated. She sighed and glanced at her watch. Only half an hour before she was scheduled to meet Gage at the lawyer’s office, and she definitely needed a breather before she’d be ready to face him. She rose from the padded, wooden chair, fidgeting with her hair again, before heading towards the back of the store. At least, she could steal a few moments of quiet in the woman’s restroom, even if it meant listening to the steady drone of elevator music playing across the intercom.

She ducked down a small hallway, skirting a discarded bucket and mop. She turned left at the end, but stopped at the entrance, staring at the muck splattered across the floor and the large, yellow sign blocking the doorway.

She stepped back, reading the black, block letters with a sigh. She backtracked to the hallway, opening the door to the men’s room. The only male employee had scampered off on a break, and she doubted the manager would care which restroom she hid in.

“Hello?” She stepped inside, ignoring the predominately male scent lingering in the air, and headed for the sink, eager to spray a handful of cool water across her face. Of all the days to have a book signing, today was by far the worst. She never would’ve agreed if her agent hadn’t conned her into it, subtly reminding her how well her books did when she mingled amidst her fans. While it was usually one of her favourite activities, her heart just wasn’t in it today. She looked down at her left hand, noticing how bare it looked. She feigned a smile, telling herself it was all for the best…Gage didn’t love her, so why make them both suffer?

She wiped a tear from her cheek, feeling others sting her eyes. She hadn’t seen Gage in the past three weeks, and it’d been over six months since they’d made love. She lowered her head, remembering their last encounter. He’d been angry, and had touched her in a way she’d never forgotten. Her heart clenched wishing the memory was one to cherish rather than forget. It marked the beginning of the end.

She stifled a sob, biting her bottom lip for strength, when something cold brushed against her back. She looked in the mirror just as the blade pierced her shirt, sinking into her flesh until the hilt locked against her skin. Her chest constricted as her throat clamped around a scream. She locked her fingers around the porcelain rim as an arm reached around her chest, pulling her backwards. She slammed into a man’s chest, feeling the knife twist in his grip.

“Did you think you could escape me, Sarah?” he slurred, brushing the side of his woollen mask against her neck. “Did you really think I wouldn’t find you?” He slid his hand under her shirt, cupping her breast as he gazed at her reflection, inhaling deeply. “What an intoxicating scent,” he mused, plumping her flesh, rubbing his erection against the cleft of her buttocks. “You smell good enough to eat, precious.”

Brooklyn stared at the mirror, her body frozen, as the pain buckled her knees, leaving her sagging in his arms, the shaft of the knife holding her up. He was a full head taller than she was, with large shoulders and strong arms. He was covered in black, from the ski mask on his face to the sweater and pants hugging his body. They were tight, clinging to every inch of his muscular frame. She looked into his eyes, watching the brown colour turn black with desire. And though she couldn’t see his mouth, she knew he was smiling.

“This is only the beginning, Sarah. And if you survive, you’ll prove you’re worthy of my love.” He pulled the knife free laughing as she fell to the floor. “Don’t disappoint me, Sarah. I’ll be waiting.”

My next release is this coming Tuesday and I'm thrilled. Worlds Apart will hit Resplendence's website on the 25th, and I'll be posting an excerpt and blurb here then. I hope you join me.