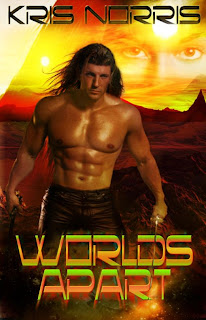 Starship Captain, Samantha Grier, has only two options—crash land her warship on an unknown planet inhabited by God knows what, or drift through space. She never counted on becoming part of a colony of barbarians, or becoming the center of attention for their illustrious leader…a man more than capable of claiming both her heart, and her body. Too bad not everyone is thrilled by the new sleeping arrangements.

Griffin can’t believe his good fortune. Not only did the humans arrive just as their power grid was failing, but their Captain is a vision of beauty. With blue eyes and fair skin, he knows instantly that she’s his intended mate. But claiming her is the easy part. When brutal attacks bring the two cultures to the brink of war, will he be able to keep the colony together, while maintaining his role as her mate? Or will the tension leave them worlds apart?

Griffin growled at the image that materialized in his head—Sam naked, her thighs spread wide as she worked her delicate finger around her pulsating nub. He could see the look of pleasure on her face, smell the hot aroma of her arousal, as she fought to draw her climax out by sinking her finger inside her, feeling her walls clasp her skin.

He felt his lips pull back of their own accord as he lowered his mouth to her shoulder, scraping the mark he’d left just a few weeks earlier. A muffled cry strummed through the air, her head tilting away to grant him access. He threaded his fingers through her hair, holding her open.

“Did my naughty little mate just confess she pleasured herself while I worked just moments away, hot and hard at the knowledge I’d miss tasting her sweet sheath?” He shook his head as he teased the hole of her sex with just the tip of his finger. “Dangerous choice, little one. One that won’t go unpunished.”

Her surprised shriek filled the room as he twisted her in his arms and lifted her up, tossing her over his shoulder before heading for the door. He nodded at Sirena and Cain as they walked into the room, ignoring the scathing glares they gave him. They still didn’t approve of his choice of mate, but he wasn’t in the mood for explanations.

He turned left out of the doorway and picked his way through the intersecting hallways, smiling at the way Sam cursed under her breath. She obviously hadn’t expected him to carry her off like the barbarian her crew often accused him of being, but she’d pushed him too far. Watching her bite back tears as the pain of their separation all but tore her apart was more than he could stand. After today, she’d understand the depth of their bond.

Sam huffed and crossed her arms on her chest when he finally placed her on her feet at the edge of the sofa in their room. A small crease lined her forehead, and her foot tapped restlessly against the floor. “Just what in the hell do you think you’re doing?” she said, unlocking her arms so she could palm her hands on her hips. “In my world, men don’t throw a woman over their shoulder like a bloody sack of potatoes and march home like some conquering hero.”

Griffin matched her accusations with a step forward. He could tell by the slight twitch in her mouth that his dominance excited her, though he knew she’d never willingly admit it. He reached out and cupped her chin, stroking one side with the pad of his thumb. “You can claim you want your independence... that you don’t enjoy when I take control, but your body says differently.” He inhaled, closing his eyes at her sweet scent. “You smell delicious. Now come with me, and I’ll show you what happens when you deny me the right of pleasuring you.”

“But—”Her voice cut off into a delighted squeal when he hoisted her into his arms and carried her into the bedroom. A brilliant smile lit her lips, accentuating the cute dimple in her chin. He covered the four strides to the bed, sitting down on the edge with her still cradled in his arms. She grabbed for his neck when the bed gave beneath his weight.

“I’d never let you fall,” he said, brushing the lose strands back from her face. “But I’m afraid I can’t allow your actions to go...without recourse. After all, you reached your pleasure...” he held up his hand, stopping her protest, before continuing. “However unsatisfying it may have been.” He smoothed his fingers down her chest, stopping between her breasts. “Now be a good girl, and take your...punishment.”

Sam’s eyes widened when he fisted her shirt, tearing it off before twisting her forward, repeating his actions with her pants, as he laid her across his legs. She wiggled against his hold, stilling when his fingers traveled the length of her ass.

“No, Griffin. You are not going to spank me.”

“I can see you’re still intent on denying what your body so clearly desires.” He swiped a finger through her crease, gathering her cream on the tip. He hummed as he sucked the digit clean, dipping down for another pass. “How many times must my hand connect with this beautiful flesh before you admit what I know to be true?”

He chuckled at the authoritative tone to her voice, all the while her body clamored for his touch. He curled over her back, kissing her neck. “Trust me.”