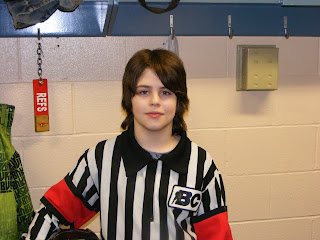 If there's one thing I've learned about being a parent, it's that you'll have more than your fair share of moments...some are fabulous, some aren't. You'll be scared, happy, sad, angry, worried and—there will be times when you're just plain proud!
I'm so lucky to have had one of those moments this weekend. Now, let's set the picture just a bit...
For those of you who don't know, I have three kids. Two active, outrageous boys and an even more outrageous girl. Kyle's the oldest at 13 going on 25, Jared's stuck in the middle at 11 going on, well, not quite sure. Sometimes I think 11 again, but hey, 12 is fine. And then there's Sydney, who's 8 going on 30, lol.
Now my boys are typical boys. They play hard, get lots of injuries from said play and do just enough to get by in school. Jared is lucky in that for many subjects, he's a natural. Kyle, while he's got the brains, he just lacks the motivation. And with him being in grade 8, well, I'm trying to get him to see how he might actually have to try once he gets to high school. He does have one passion—wait for it because being Canadian this will surprise you—ready—hockey!
I know, totally out of the ordinary for a good old Canadian boy. But yes, he loves hockey. He's actually applied for a hockey academy next year, but that's another post once we find out. Anyway, in his pursuit of his love for hockey, Kyle decided to extend his passion to another on ice position—one that actually earns him money. He's a hockey official...or ref as I call it.
So, this is his second year ref-ing and he loves it. Now, realizing his options for a lifelong career are perhaps more narrow than I would like, I've been encouraging him to keep up with his ref-ing. He's taken it even farther and is taking every job he can get his hands on. He willingly gets up at 5 a.m. on both Saturday and Sunday to ref games and just this past weekend, ref-ed two games then, with only 10 mins between, went and played his own hockey game. Yeah, he's dedicated. And as a result, he got recognition!
I was informed this weekend that Kyle is Comox Valley's Official of the Month! I know, it's such a small thing, but damn, I'm so proud of him. And he'll have his picture up on the Hockey website for the next few weeks! Sigh....
So take a look folks, that cute face is the future of officiating... and don't be surprised when you hear his name in the NHL one day... cause those older guys gotta retire someday!
Congrats, Kyle!!!!! You earned it!
Posted by Kris Norris at 4:23 PM