Wow, is it really the middle of October already? I swear the kids just started school last week! But no, days are zipping by and I'm so busy with school and trying to edit an incredibly long book, I don't have time to do much more than sleep... and I only get a few hours of that a night.
So, I realize this is all long over do, but I thought I'd announce some news and post an excerpt of my first short story being released in just nine days! Yes, you heard me... NINE days. On October 26th Sacred Talisman will grace the virtual bookshelves as my first release with TEB. And I couldn't be more excited. 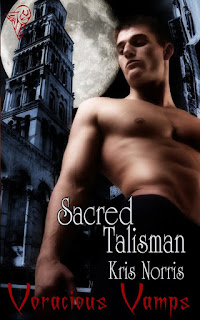 Here's a taste of what's inside this awesome cover...
Sacred Talisman
Seasonal/Vampire/Paranormal
Short Story
ISBN# 978-907280-34-4
Rated - Total e-burning
After roaming the earth for five hundred years, Rafe’s life is about to begin.
Rafe isn’t your ordinary vampire. He’s an Enforcer—a vampire created for the sole purpose of guarding a sacred talisman and preventing its power from being unleashed on the world. There’s just one problem. He has absolutely no idea how to find it.
The last thing Terryn expected was to have a handsome stranger come to her rescue when some creep drags her into an alley on Halloween. With blonde hair, blue eyes and a body rivaling every wet dream she’s ever imagined, she can’t help but wish her hero would keep her pinned to the wall. Too bad she doesn’t do one-night stands. But when the guy claims her necklace is an ancient talisman, and it’s his job to protect it, she’s launched into a world of prophecies and vampires, and discovers sex with the undead is hotter than her wildest dreams.
Now if they can only survive the night, and prevent a hoard of rogue vampires from claiming the pendant’s power, life—or even death—might just get interesting.
Excerpt:

Terryn panicked. The feral look in Rafe’s eyes, the dark energy that rolled off his skin in visible waves overwhelmed her desire and she took off running. A hallway only a few steps away marked salvation. She darted down it, a harsh growl shadowing her footsteps as she tumbled against the first door, shouldering it open and slamming it shut behind her. A loud click echoed through the room as she backed away, not sure how she’d locked it, but aware she’d succeeded in sealing her escape. She released her breath in an audible rasp, crossing her arms on her chest as she stared at the door, waiting.

“If this is your idea of keeping an open mind, I’m afraid we’re at an impasse.”

Terryn shrieked, pivoting towards the voice behind her, losing her balance when Rafe stepped forward. His fingers gripped her arm, preventing her from crashing to the floor as she stared at him, mouth gaped open, breath stalled in her chest. “But…the door…how?”

Words collided in her head, a surge of fear dipping the room. Rafe’s chest connected with her cheek as he pulled her against him, cradling the back of her head with one hand as the other snaked around her waist.

She took his advice, noting how his equally hard cock pressed against her stomach as her chest pushed into his. “Oh. My. God.” It was little more than a whisper, but it sounded loud in the stillness.

“I’ve been called many things, but God isn’t one of them.” His smile greeted her as he pulled back. “And before you ask, no, I can’t fly. Not in the sense you’re thinking. It’s more of a shift through time. But it’s equally effective.”

She could only nod, her throat too dry to speak. He was a vampire—a blood and flesh vampire. The undead. She let her head fall back, intending to close her eyes, but what greeted her stopped her cold. Three large mirrors decorated the ceiling, casting a clear reflection of the room. A large bed she hadn’t noticed took up most of the space, with only a chair visible in another corner. But it was her image that shocked her, because it was just that—her image. Just her. Her arms curled around an invisible force, her chest pressed against nothing, as her hair swayed across her shoulder, the result of Rafe’s hand stroking the length. He sighed as her gaze met his.

“Yes,” was all she managed when he released her, cursing as he surveyed the room.

“Of all the places you could’ve run, sweet thing, this was by far your worst choice.” He moved to the door—or did he just appear at it—and tried the handle. “Fuck.” He turned to face her. “Do you know why the door locks behind you?”

She glanced at it, shaking her head.

“Because it prevents the clients from leaving until they’ve given the owner a good show.”

She stared at him, completely confused, before following his gaze towards the bed. What she hadn’t noticed in the reflection was the set of restraints chained to the headboard, the shinny leather dark against the white frame. She looked back at Rafe.

“That’s right. It’s a sex room. This one tends towards bondage, though I don’t think it’s a requirement.” His lips kicked up into a sly grin. “There are cameras mounted throughout the room, just in case you were thinking we could sneak out.”

“So the only way to get the door unlocked is…”

Terryn was sure her mouth dropped open as she focused on the restraints. The leather was black and smooth, and she had a fleeting image of it wrapped around her wrists, her naked body splayed out across the bed. She could see her hair tussled across her shoulder, her back flexing in pleasure as Rafe mounted her from behind, his shaft piercing her wet flesh as the muscles in her ass jumped from the impact of his groin against hers.

A soft moan trembled across her lips and she dipped her tongue out to moisten them. She went to turn when Rafe pressed his body against her back, his hands capturing her waist.

“I can see your thoughts. The way you imagine your body moving beneath mine, your hands bound in front of you. It’s not the first time you wondered about how it’d be between us. How well I could pleasure you. You can try and fight it, but in the end, our mating has already been foretold.”

She tried to shake her head, but the images returned. Rafe driving into her, one hand stroking the tiny knot of nerves in her slit as the other spanked her ass until it turned a deep shade of red. She tried to free herself, but could only take what he gave her, the bands around her wrists and feet immobilising her.

Terryn squeezed her eyes shut, hoping to drive the erotic pictures from her head, as Rafe’s warm breath feathered across her nape, dampening her panties with her slick dew. Her head lolled to one side, loving the feel of his lips across her skin, his tongue hot against her neck. Again she felt like he was tasting her, gathering her essence on his tongue so he could identify each individual element that mixed together to form her unique feminine scent. A calm settled inside as the pendant grew warm on her skin, matching the heated feel of Rafe’s tongue. She leaned into him, one word whispering from her lips.

I hope you enjoyed my little teaser. For another excerpt, feel free to visit My Website. And don't forget to head over to TEB and enter their contest for a chance to win a gift card.

In other news, I'm pleased to announce my Christmas release, Centrefold, has been accepted to be part of TEB's Christmas Cracker Collection!!!! I'd been keeping my fingers and toes crossed, so it looks like it panned out for me. Also, I've just signed another contract with Resplendence Publishing for another full length novel, working title Hard Target, due out late next year. I'm very excited about this as Hard Target is the first novel I ever wrote and is the last one I've tried to get published. It holds a special place and perhaps has a bit more of me in it than some of the others, lol.
Okay, back to work, school, kids and, well, everything else. We're off to see some Zombie's at the movies today, so wish me luck.
Cheers,
Kris
Romancing life...one adventure at a time.
KrisNorris.ca
Posted by Kris Norris at 9:54 AM